Ocean dead zones are literally that, by being a marine Plutonian sector void of life with an inclusion of the seafloor littered in an oceanic macrocosm of skeletal remains garroted in a layer of matted, slimy anaerobic bacteria. Sea life that are mobile enough and weren’t rendered unconscious were able to scurry off into healthier environs. The ones that were sessile or slow to move weren’t as fortunate and died off in the dead zone’s strangle hold. The culprit is a lack of dissolved oxygen (DO), which supports sea life. The current cause of depletion is primarily manmade and is twofold.

Overall, median sea life requires at the very minimum a 30% DO level of molecular oxygen saturation and thrives at 80% or above. When DO is taken out of a watery region, it is said to be hypoxic at DO levels between 1-30%. Below 1%, virtually void of any oxygenated water, it is anoxic, where even aerobic bacteria cannot exist, much less higher life forms. What is causing the depletion of DO in the world’s oceans are high nutrient runoffs and rising temperatures from global warming.

River runoff that eventually makes its way into ocean and sea waters are loaded with organic sewage and pollution, plus nitrogen based fertilizers in the form of nitrites and nitrates that cause eutrophication once dumped into the deltas. In eutrophic induced environments, the nutrient rich influx is ideal for rapid plant growth. Algal blooms proliferate in this setting overwhelming fauna that normally feed on checked alga and plant populations. Millions of tons of individual algae die and settle to the bottom where they rapidly rot, decomposed by aerobic bacteria that in turn multiply absorbing and depleting DO at accelerated rates. Industrial pollutants further aggravate the depletion by displacing DO as freed gas thus removing it from the waters.

Coastal areas such as bays and fiords (fjord) already have naturally low flow rates making them more prone to siltation and stagnation. A coastal inlet may have a normal 6-8 ppm (parts per million) of DO, at just enough to support acclimated fauna. But, when levels drop to 1-2 ppm, due to river runoff with its accumulated manmade baggage, it stresses wildlife, deforming internal and reproductive organs shortening species' life spans and reproduction. Any further drops below the critical 1ppm of course cannot support life period…it either dies off or flees the region. This has occurred many times in Louisiana’s Mississippi Delta and the Chesapeake Bay in Maryland. 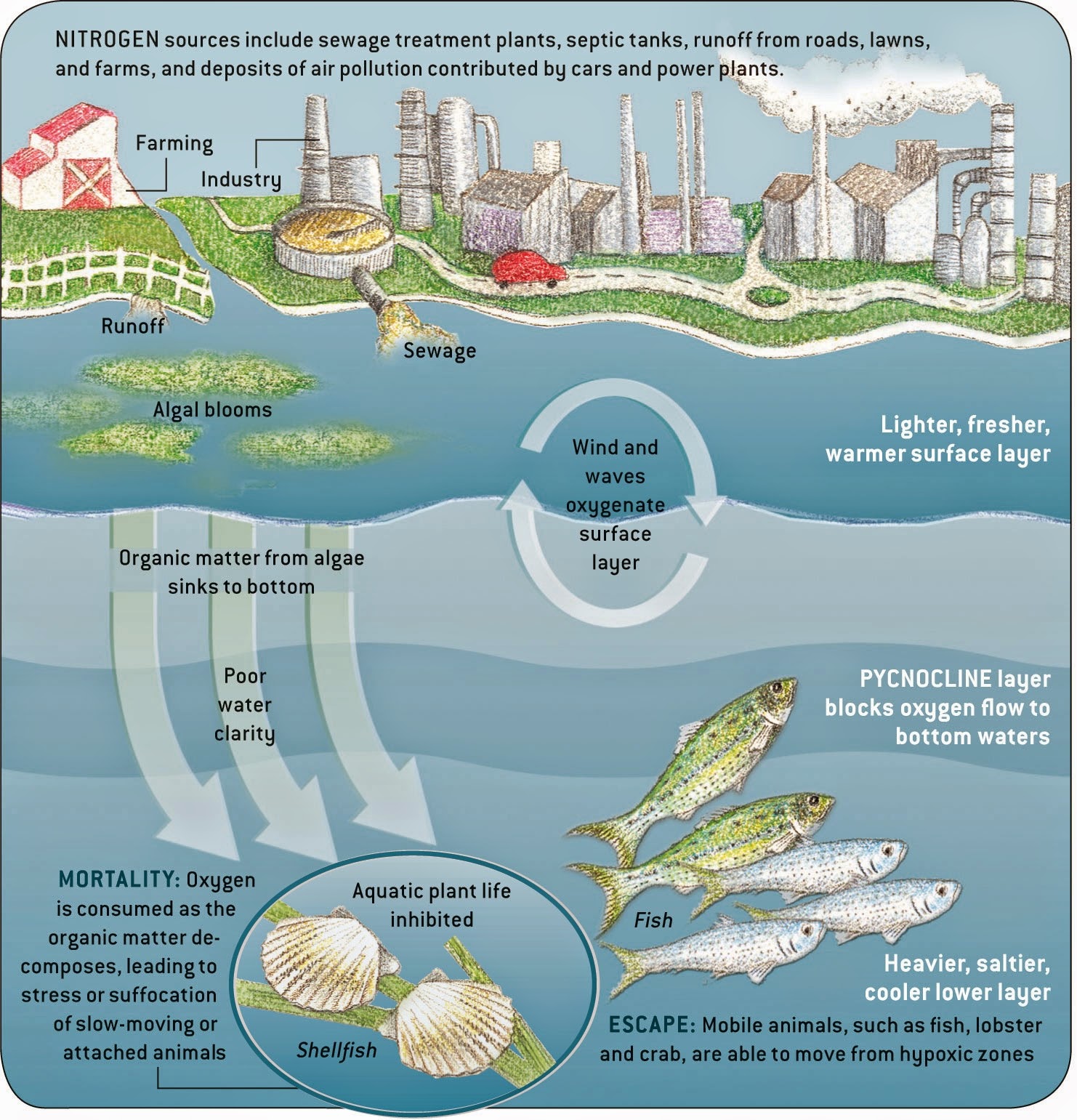 We all have heard of the detrimental effects of global warming on ocean bodies. In addition to displacing saturated atmospheric carbon dioxide into the oceans that creates hostile carbonic acid, which in turn bleaches and kills coral reefs, carbon dioxide also induces rising sea levels, warms waters, disturbs prevalent weather patterns and is creating stronger winds affecting oceanic rivers and currents. Here’s how it works.

Apparently, warmer airs are affecting wind patterns, making them more powerful where they blow and circulate above the oceans generating a surge of surface water movements. This in turn creates rivers of current causing far more an up welling of deeper nutrient rich waters than has been normal. Once these laden filled phytoplankton waters reach the surface and sunlight, it allows the tiny oceanic plants to proliferate, thus initiating phytoplankton blooms. The same eutrophic process occurs as in the coastal river runoff environments, except that phytoplankton blooms occur further out in deeper waters. We know that this is occurring, for the detection is the result of correlating increasingly warming ocean waters data to increasing and new hypoxic/anoxic ocean zones. It nicely fits the patterns of the South African Benguela Current, the Humboldt Current off Peru and the California Current off of America’s West Coast. These currents are of particular interest for they account for ~20% of the world’s fishery catches. Intensive studies have been conducted to seek out the cause of fish die-offs. These examinations have derived at the conclusion that heated lands and atmospheres are making for stronger and more persistent winds that eventually lead to the intensive blooms and resultant die-offs.

Already stressed from over fishing, the bloom die-offs are only complicating a full recovery of healthy fish populations. Dense bloom populations in themselves will deprive waters of DO during night darkness through respiration. To compound the matter even further, once dead, as the decomposing algae or phytoplankton rot, clouds of noxious and deadly hydrogen sulfide are produced adding more stress to the dead zone’s toxic and lethal environment. Swaths of oxygen deprived ocean waters severely reduce biodiversity and biological productivity having a resounding impact throughout the food chain.

According to data researched by the Leibniz Institute of Marine Sciences at the University of Kiel in Germany, dead zones have increased up to 85% vertically and 50% horizontally since records were first kept. Each year they grow in size. Also, they may only affect certain layers of ocean waters with hypoxic or anoxic oxygen levels present only on the surface, or in the middle or in deep waters. Data compiled by the World Resources Institute states that there are currently 375 dead zones ranging in size from a square kilometer (0.4 miles2) to over 70,000 square kilometers (27,000 miles2).

Ocean dead zones are also natural phenomena. Linked to an era of intense global warming during the Permian, 251 million year old stratified layers detail an episodic event of oxygen deprived carnage that witnessed earth’s largest mass extinction thus far. Greater than 90% of all marine life was wiped out in the hypoxic/anoxic environment.

Fortunately dead zones are completely reversible. Case in point is the Black Sea. During the Soviet Union’s heydays, tons upon tons of fertilizer runoff flowed into it making the whole sea virtually one big cesspool of a dead zone. In fact the Black Sea was the largest dead zone in the world at the time. After the breakup of the Soviet Union, costly chemical fertilizers were no longer used and as an unintentional result, since the beginning of the 21st century, the Black Sea is essentially dead zone free.

Once on a global front, if we truly address river runoff content and put a halt to global warming transgressions, all ocean waters may become virtually dead zone free adding to our healthier life.