Why Doesn't the Ocean in the North Pole Drip/Spit Venom


Below are some older commentary articles of mine. One, the science one, was published in 'Helium.'

I posted them here for they're a little quirky and fun, but hopefully too a bit entertaining and informative.

Please do note in 'Spit Venom,' a take on the right's usual gnashing of teeth, I stated that Bush would be 'shooed' and sure enough two weeks later, he was indeed 'shoed.' Just an interesting coincidence that's all!


See what ya think and perhaps say in commenting on...


WHY DOESN’T THE OCEAN IN THE NORTH POLE DRIP 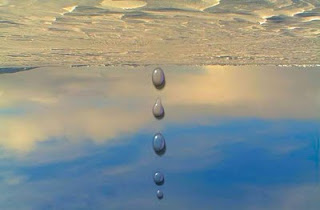 In geological terms the Arctic Ocean, sitting atop the world doesn’t drip, due to that constant known as…gravity. With earth’s center of mass at its most inner core, gravity pulls inward in all directions whether you’re stationed in the Arctic, the equator or the Antarctic. Gravity’s unidirectional force is equilaterally tugging down to that point.

Suppose one dug a hole all the way through earth. Then, supposing some more that one decides to jump into the hole. Discounting heat encountered (by gosh the terrific heat down there) during his freefall, when would he actually stop falling?

In climatic terms though, the Arctic Ocean encircling the North Pole is starting to drip, drip and drool some more. With atmospheric conditions now in place inducing global warming accentuated by man, polar ice caps are increasingly thawing, turning into slush, dripping and going away. This can be alarming, for the polar ice caps serve as air conditioning for the rest of Earth.

Greenhouse gases allow sunlight in, but when reflected back into the atmosphere, the gases have the potential to trap sunlight and its resultant heat. Unfortunately global warming feeds itself. White surfaces as ice caps reflect heat. The more they melt and disappear the more the darker waters are exposed absorbing heat. The warmer the atmosphere becomes, the more carbon dioxide is displaced into oceans, loosening deep water’s cold and pressure hold on hydrous methane, releasing it into the atmosphere where methane gas is 21 times more potent than carbon dioxide in trapping heat.

We know man is contributing, for in nature the isotope carbon 12 makes up 99% of all the earth’s carbon. In nature, the isotope carbon 14 is found only in trace amounts, but synthetically produced by man’s emissions it’s found in much more abundant amounts. Polar ice core samples are a layered snapshot of atmospheric conditions through time. For recent times, in which corresponds with man’s industrial activity, guess which carbon isotope is showing itself more? That’s right…carbon 14.

Now, the answer to the original aforementioned question: Once he fell all the way to the center he’d start losing velocity. But still propelled by the enforced inertial speed (escape velocity) superseding Earth’s gravitational tug towards the center from the other half of the hole, he’d make it not quite to the entrance of the exit hole, wherein only to lose escape velocity, falling back down from gravity’s pull; becoming in effect a pendulum of sorts falling from one hole’s opening to the next endlessly. I might add though, this would be quite uncomfortable due to the extraneous internal heat created by friction, gravitational compression, radioactive decay and the molten core; so don’t try this on your own.

If Earth’s gravitational pull were shaped like an arrow, the arrowheads emanating from all directions would be traveling towards earth’s core, whereupon in reaching their target, would all meet and converge at earth’s inner gravitational center, their target endpoint.


After endless revue of conservative rhetoric in that its only recourse of concern in deceitful character bashing was to distort facts, instill fear, sway away from issues and spread empty rumors, I feel the mendacity here leads me to become a bit vulgar myself in venting about the tactics of Refiblicans as self-absorbed nincompoops along with the religical conservatives who only serve as mindless sweepstakes for the Refiblican politicals.


It only takes a few minutes of wading through the sewage muck of extreme right-wing radio shows and websites of what flatulent composition the mental atmosphere is, in which these paranoid minds inhale, breath hold then exhale to the world self-righteous proclamations of sting/biting callous assaults, aimlessly void of factual content.


With the obvious truth in total relapse, their wild fantasies present patterns of tapping the fuel of fear to elicit their false claims. Their most dour sour bellyaching ways seem geared towards those deaf/dumb/blind self-opinionless lost souls who allow their words to be chewed by the ultra right Moguls and then allow the venomous spit to be incorporatively spat down their throats and swallowed upon command.


Whatever has happened to being skeptical enough in wisdom… to conjure your patriotic duty and dissent when government is blatantly out of kilter?


If these sullied patterns were'n’t revealed and countered, even as they are pitied and deprecated, the resentment and rage would go unchecked leaving an isolated subculture of no checks and balances giving sway to an inflicting moral majority gone rancid to force its self-righteous beliefs on us all...at the expense of us all. The neocon does not hold the key to being the only ‘Patriotic Citizen’ just as much as the evangelical Christian cannot claim sole rights to being the ‘Real American.’


Soon, Bush is gonna get shooed and swished away. Once Obama wins, these vitriol conservative pundits will have a field day with their falsities and constant search for Barack’s first misstep. So while staying a tad bit concerned, go ahead and enjoy the amusement, for rest assured they are foaming at the mouth cause America voted against their snorts.


Ahem, although that felt kind of refreshing in lambasting the right, I’m confident in knowing I want ever resort to and whiplash their tactics back at ‘em on a constant basis in this mindless spit venom fashion, but instead pursue the truth, whether it hurts or not.